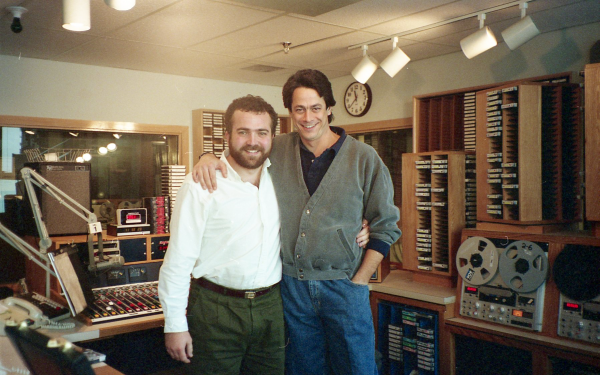 John Majhor was the first famous radio and television person I ever worked with.

The Toronto broadcaster was well known in the 1970s and 80s for his DJ work on CHUM radio, and as VJ of the first music video show in Canada called Toronto Rocks where he introduced videos and interviewed musicians. It was a show I watched regularly.

John and I worked together at two Toronto radio stations, first at 97.3 CJEZ where he was morning host and later CFRB 1010 where he filled in as a talk show host.

Memory is a funny thing. Two things that stick in my mind about working with John are a photo he took of the two of us and “the body-piercing caller”.

John was hired as the morning host of CJEZ in 1991. He had come back to Toronto after working at stations in the U.S. where he was originally from.

He was such a big deal to me that I asked him for a fan photo so I could show my family and friends.

If he thought the photo request was weird he didn’t let on but graciously consented to my request.

He was in the middle of his DJ shift when I approached him in the radio master control. First someone took the photo of the two of us and then John  took my camera and said “let’s try this.”

Long before they were labelled selfies, people in the late 80s and early 90s were flipping around their cameras, with real film, which had no flip mechanism on the screen.

You would never know if the shot was framed or in focus until the photo was developed.

John took the photo as he appeared to know what he was doing and had the longer arms of the two of us.

It was a perfect shot!

She couldn’t believe what she was hearing

The second time John and I worked together was at CFRB 1010.

If I remember correctly John filled in on various shifts as a host. Our paths crossed when he filled in on the evening show, which ran until at least 1:00 a.m and I was working the overnight news shift.

One memorable moment at work happened during an interview segment with two guests who were talking about body piercing. Listeners called in to talk about their piercing experiences and told stories of where their piercings were located and why they chose to pierce certain parts of their body.

This was not a subject that was normally talked about on radio stations at the time. At least I had never heard one before this.

The last call of that segment was from a woman who explained how she couldn’t believe what she was hearing on the radio. She said she didn’t understand why these people would want to pierce their bodies and she found it disgusting.

She started out with what I would describe as an even-toned conversational voice. It progressively got louder and she then started speaking faster.

That’s when the negative comments started.

And then the f-bombs started dropping!

It was a brief tirade, but in radio timing, it felt like it went on forever. Then she closed off her tirade screaming the statement at the top of her lungs “…And I can’t f***ing take it anymore!” And then she hung up.

Fortunately the technical producer and sound board operator hit the seven-second delay button that was always on during the talk shows in case of situations like this.

The last thing the listeners heard was how disgusting she found the topic. There would have been a pause on-air when the seven second delay was hit, and then John came back on, sounding rather shocked and said.  “Well…” and he added a comment about the caller disagreeing.  He thanked the guests, said the news was next, and we went to a commercial.

The 60 second commercial gave me enough time to close my mouth from the shock of what I had heard before reading the news.

We laughed later when we knew for certain the woman’s f-bombs didn’t air; saved by the seven second delay.

I lost touch with John after we both left CFRB. He continued to do voice work in the Toronto and national markets, before moving back to the U.S in the late 1990s.

I hadn’t heard from or about him until after hearing the news that he passed away in 2007 after a battle with cancer. He was 53.

John was the nice guy I remembered watching on Toronto Rocks. He was a big brother who offered encouraging words to many on staff including me. At RB he used to come into the newsroom to say hi and we would catch up on work and life in general.

Blogger’s note: John Majhor wasn’t the only famous radio person to work at CJEZ around that time. There were two more I would hear about when I started working their.

Rosalie Trombley: The words trailblazer, icon and radio legend are used next to Rosalie’s name. She is known for launching the careers of many well known musicians including Elton John, Alice Cooper, Bob Seger and Ted Nugent while working at AM 800 in Windsor in the late 1960s and 1970s.

In 2005 she became the first person to win the award named after her. The Rosalie Award is handed out every year during Canadian Music Week. The website cmw.net says the award “was established to recognize Canadian women who have blazed new trails in radio.”

As I was in news and she was in the music department, her co-workers, young types like me who I hung out with at work, told me I had to meet Rosalie because she was cool, she was very engaging and supportive to them.  Her young assistants shared stories with me about her time working at AM 800. I remember one where they said musician Alice Cooper picked up Rosalie’s son from his school in a limo and took him for lunch.

Carl Banas: He was an evening announcer at CJEZ. You may not remember his name but you may recognize some of his work. The most iconic voice work he did that is still heard is from the Christmas tv cartoon Rudolph The Red Nosed Reindeer. He voiced the parts of the head elf, the spotted elephant and other toys. That work from 1964 was one of his first voice jobs in a very long radio and tv career.  His voice was heard on network commercials, on a number of animated Canadian television shows and he was a radio DJ in Toronto.