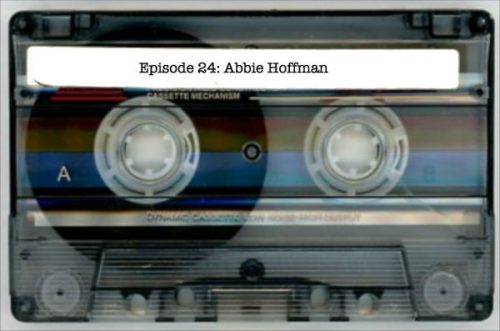 The flu and serious injuries from a car accident didn’t stop Abbie Hoffman from talking for two-and-a-half-hours to an audience at the University of Guelph in September of 1988.

The co-founder of the 1960s counter-culture group the Youth International Party, or Yippies as they were commonly known, had a lot to say.

No surprise, he talked politics. Americans would be electing a President that November in a race that pitted George Bush against Michael Dukakis.

As well he had co-authored, with Jonathan Silvers, An Election Held Hostage which was about to be published in the October edition of Playboy Magazine. The feature discussed the arms for hostage deal and its influence on the Reagan-Carter American presidential election of 1980.

His talk at War Memorial Hall was titled Watergate to Contragate: Criminals in the White House.

Abbie Hoffman was in southern Ontario that year for the Festival of Festivals in Toronto, now known as the Toronto International Film Festival.

One of the films to be presented was the documentary Growing Up in America by Canadian filmmaker Morley Markson.  The film follows the lives of 1960s political activists including Hoffman, Jerry Rubin and Timothy Leary in the 1980s.

Hoffman had been charged by the U.S federal government in 1968, with a group known as the “Chicago Seven”,  for anti-Vietnam protests and conspiring to incite riots at the1968 Democratic National Convention in Chicago.

In the 1980s, Hoffman was living as a fugitive in Canada on the run from a 1973 drug charge in New York that would have put him in prison for 15 years.  He used the alias Barry Freed. While in Canada he was working with environmental groups including one called Save the River.

They worked to protect bodies of water in the U.S and Canada including the Thousand Islands, the St. Lawrence River and the Great Lakes.

Abbie Hoffman was 51 years old when he spoke to the Guelph audience on September 13, 1988.

I was given about ten minutes to speak to him backstage.

Quite honestly after a two-and-a-half-hour talk, and about 30 years of cultural baggage, how would I start my interview with Abbie Hoffman?

And how would we make it different from other interviews with him?

During his talk Hoffman had said that young people in the 1980s were acting middle-aged. That seemed to be a good starting place for our discussion. So I asked him to explain that remark.

This interview originally appeared on my third year college radio show On Campus on XLFM at Conestoga College.

It would be replayed on the news magazine show Journal 106 on CKLA-FM in Guelph in April of 1989 after Hoffman’s death by suicide.