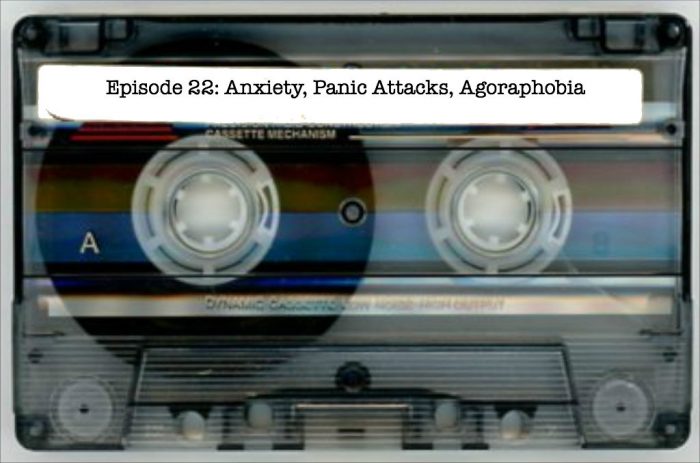 My friend needed to talk!  They needed to explain the reasons why we hadn’t seen much of each other and why, when we did agree to get together for drinks or dinner, there would be a cancellation at the last minute.

For years, they explained they experienced panic and anxiety attacks which would physically paralyze them.

They explained the fear of having an attack at a job or while visiting family or friends forced them to stay home.

My friend detailed how at first they thought, during one of the first panic attacks it was a heart attack because they had shortness of breath and chest pains

When they started out years before our sit-down, they were infrequent but by the time we spoke, the attacks were happening on a regular basis.

My friend also explained they were planning to seek treatment.

Their story inspired me to do my own research and  produce a radio feature on the topic for a news magazine show I contributed to called CJEZ Newsweek for CJEZ-FM radio.

Doctor Richard Swinson was the head of the Anxiety Disorder Clinic at the Clarke Institute of Psychiatry in Toronto when I spoke to him in 1991.

Dr. Swinson had been treating anxiety patients for about 20 years at that point. He explained to me that everyone had the potential to experience a panic attack but not everyone became agoraphobic.

“It takes either repeated panics or a particular way of thinking about the panic attacks in order for someone to become avoidant. [That] is the technical term we use when people stop going out,” said Dr. Swinson.

“In fact many people have a lot of panic attacks and keep going out and they don’t avoid very much. It’s only the rare person who would become housebound.”

Dr. Swinson was able to connect me with two women Carol and Mary.

The 1991 feature focussed on their experiences living with panic and anxiety and the treatment they received by Dr. Swinson.

At the time I caught up with them they had been part of a treatment program at the former Clarke Institute of Psychiatry, led by Doctor Richard Swinson.

They agreed to speak to me only if I used their first names. While they were ready to speak about their experience hoping it would help others, they didn’t want their friends to find out about it on a Sunday morning radio show.

Listening to their stories years later reminded me of their courage, like my friend, to speak to me openly about their suffering in the hope of helping others who were going through the same thing would get help.

I have wondered, whatever happened to them and certainly hope life dealt them a good hand!

While the original feature focuses on the experiences of Carol and Mary there is also a mention of some of the medical treatments from 1991 that I felt should be updated.

Dr. Swinson agreed to speak to me again after listening to the original story.

Swinson said “everything has changed,” particularly the way anxiety disorder, panic attacks and agoraphobia are categorized.

“I was quite happy with what I said,” Dr. Swinson said. “ I think the patients had a different view of what their problem was than what I did.  Which I found interesting.”

“It was interesting to hear them talking about Xanax which is a medication I haven’t used in the better part of 20 years.”

Richard Swinson left the Clarke Institute of Psychiatry in 1997 for McMaster University in Hamilton, Ontario and St. Joseph’s Hospital where the Anxiety Treatment and Research Clinic (ATRC) is located.

In 1998 the Clarke Institute would merge with two addiction centres and a mental health centre in Toronto to form the Centre for Addiction and Mental Health.

Richard Swinson stopped taking part in clinical work and practicing at McMaster in December of 2017 after 55 years. He now holds the title of Emeritus Professor of Psychiatry at McMaster University in Hamilton,Ontario Canada.

What you’ll hear in the podcast

The stories highlight the experiences of two people who suffered from anxiety and panic attacks. I re-interviewed Dr. Swinson to focus on the changes that have occurred since 1991 in treatment for anxiety, panic history and agoraphobia.

In the words of Dr. Swinson ‘everything has changed’. The links below provide up-to-date resources to mental health support in both the U.S and Canada.

Listen: My 1991 Agoraphobia feature and my 2018 interview with Dr. Richard Swinson.

Read the Question and Answer with Dr. Swinson.

My 2018 Q and A,with Dr. Richard Swinson. He is Emeritus Professor of Psychiatry at McMaster University in Hamilton, Canada.

RS:Mainly it has come to be recognized as the best treatment.

And over the last 50 years it has shown itself to work with many people with anxiety disorders and other disorders.

It’s also fairly rapid for a lot of people and it can be effective without bringing in any other treatments such as medication.

JP:And with medication you had indicated it was interesting in the feature that they were talking about Xanax.

You haven’t prescribed that in a number of years.

JP:Is that because of CBT?

If it is given to a patient these days it’s usually for a very short time, maybe about six weeks and then faded out. Often CBT will be used after that is faded out.

JP:You mentioned CBT works with other disorders besides anxiety.

Could I get you to explain that further?

Also, general anxiety disorder. And the treatment now go beyond CBT. But probably with a CBT base. Motivational treatments and mindfulness treatment are for examples of additional therapies that they use with CBT.

JP:Is there a difference between the patients that you treated in the early days when you started practicing to later in your career?

RS:In most ways there is no difference between the 1980s patients and 1990s and so on.

The disorders that they had and have are the same.

It’s the way that we look at the ways of helping the patient to use their strengths in helping them get better quickly.

In the last 20 years, probably there have been many self help books and recently a lot of information on the web and many people do teach themselves without ever seeing a professional and can make very good changes.

RS:And the answer is no, for most people.

There are people who can overcome anxiety disorders to the point that it goes out of their life.

But even for people who have that experience may, lets say 10 years later, may have something that happens in their life where there is a stress or whether there is a physical problem.

The anxiety may show its head again. So, there is no cure which guarantees they won’t have it anymore.

JP:You have been working in the mental health field for 55 years. What are the highlights for you? You’ve helped so many people. What are you proud to have accomplished?

RS:Well…I’ve been very fortunate to work with hundreds and hundreds of patients who want to get better and usually work hard in getting better.

And it’s always good to see someone who couldn’t get out of their house become a person who is an aircraft personnel and learned to fly. Those things are memorable.

The other things that I would put in the same realm of satisfaction with my excellent colleagues.

I had the very good fortune to work with excellent psychologists through the years. Dr Marty Antony was the Director of the ATRC when it was established in Hamilton in 1980 and when he transferred to Ryerson University Dr Randi McCabe took on the leadership.

Together with our team and teams of people around the world in bringing these ways of helping people.

Also the students are another big part of having a very interesting time and insight in psychiatry.