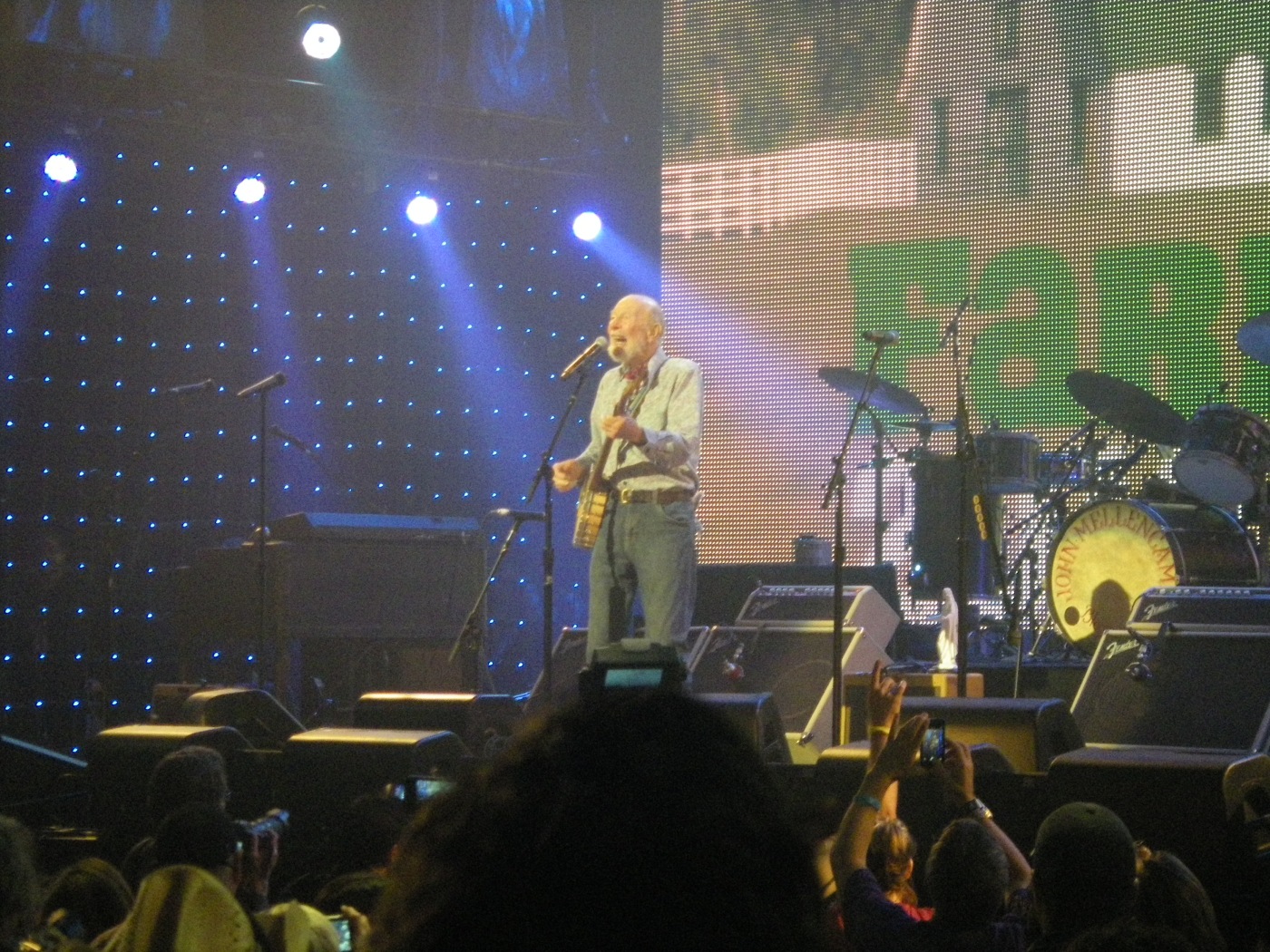 One item on my list of lifetime-coolest-moments-ever was being in the audience at the 2013 Farm Aid concert watching folk singer Pete Seeger steal the show.

Despite, as he put it, his lack of voice, the audience heard him loud and clear. They stood for his two song set, sang along and took video and pictures as a keepsake of the memorable event.

Seeger’s trip to the stage

Only a few within the Farm Aid organization knew about the top secret mission to get the iconic singer to the stage of the Saratoga Performing Arts Centre in Saratoga Springs, New York. They would require the help of Seeger’s daughter who would drive the singer four-and-a-half hours from his home in Beacon, New York.

There he was on stage, just him and his banjo. Pete Seeger, the man who wrote such classic songs including “Turn, Turn, Turn,” “Where Have All The Flowers Gone?”, “We Shall Overcome” and “If I Had A Hammer,” a song he co-wrote with Fred Hellerman, a bandmate from the American folk group The Weavers. It was the first song of his set and he now wanted us to sing with him. While keeping my reporter hat on, I also cheered and joined the chorus of people singing.

When the song ended he applauded the audience for their choral effort in singing his classic tune.

Farm Aid’s inspiration came from a comment another folk singer made at the Live Aid for Africa concert in 1985.

Bob Dylan called for some of the money raised at that show to go towards helping family farmers who were at risk of losing their livelihood. Within two months Willie Nelson, along with John Mellencamp and Neil Young organized the first show in Champaign, Illinois. The event is now held every September.

Since then the organization has worked for America’s farms and farmers. That includes championing the importance of food from family farms, promoting the good food movement and offering support and resources to family farmers. Pete Seeger performed at the 28th concert which was being held in his home state of New York.

The crowd erupted when he asked the founding members of Farm Aid to join him on stage and sing with everyone. He tuned his banjo to the key of E and then led everyone to sing the Woody Guthrie classic “This Land Is Your Land”.

He let the crowd take over the song and besides playing the banjo, he would prompt us by yelling out the name of the next city in the song.

Then, just when you thought it couldn’t get any louder. It did.

“I’ve got a verse you’ve never heard before,” Seeger said.

“New York is my home. New York is your home. From the upstate mountains, down to the ocean floor. With all kinds of people, yes we’re polychrome. New York was made to be frack free.”

A sound explosion of sorts as the audience reacted to a new verse he wrote for Guthrie’s tune.

It was an emotional moment for many of people at the event, from the crowd to the organizers. I heard a lot of happy tears were shed back stage.

This performance was the first thing I thought of when I heard Pete Seeger passed away a few months later.

“Friends,at age 94 I don’t have much voice left. But, here’s a song I think you know. And if you sing it, why, I think we’ll make a good sound.”

Three videos of this performance are available for you to view right now.

The first, attached below, is a portion of what I recorded. While it’s smartphone quality, it captures the excitement of the crowd singing along with Seeger and the founders of Farm Aid.

The second, is a link to Farm Aid’s youtube channel and shows John Mellencamp introducing Seeger to the stage. Pete Seeger sings If I Had a Hammer.

The third, also a link to the official Farm Aid youtube channel, has the performance of This Land is Your Land.

Enjoy and sing along if you want!